Heating of the vast land masses of the northern hemisphere in northern summer reduces global cloud cover and as a result the temperature of the Earth peaks in July.

In January the sun is overhead the most extensive stretch of the global oceans, the south Pacific, the Indian, the Atlantic and the enormous Southern Ocean. At this time atmospheric albedo, via cloud cover, peaks. If one is convinced that the Earth is currently a bit to warm for personal comfort then watch out. This conjunction of cloud cover with the peak in energy availability at the surface is but temporary. It will change as the Earth’s orbit around the sun evolves over time. The current era is a good time for polar bears, presuming  that they enjoy  their winter hibernation more than the round of summer activities that includes mating, hunting, and fishing.

Consider the dynamics at work:

These drivers of climate change that are entirely natural, in fact organic in the sense that they are a product of the sun-Earth system. They have nothing to do with the works of man. All relate to circumstances at the Earthly end of the Sun-Earth continuum.

All these matters are ignored in climate science as propagated in the works of the UNIPCC.

If  emanations of the sun initiated depletions in polar surface pressure that were further magnified due to the activity of ozone then the sun itself would be responsible for another source of climate change that is organic rather than anthropogenic in origin.

If emanations from the sun changed the composition of the mesosphere or the density of the upper atmosphere there could be knock on effects in the stratosphere.

If the stratosphere were a vigorous medium then changes in ozone partial pressure at the poles would be swiftly transmitted throughout the global atmosphere.  In fact, that is manifestly the case.

OUR APPRECIATION OF THE NATURE OF THE ATMOSPHERE

As latitude increases atmospheric specific humidity falls away and the agent responsible for the elevation of the tropical tropopause is no longer present to the same extent. The moisture driven tropopause evaporates into nothingness, the cold point moves into the stratosphere.

Near the poles the cold point is driven by the descent of very cold mesospheric air in winter, another agent and another phenomenon entirely. Where does this leave the ‘tropopause’ and indeed, the ‘troposphere’. We must realize that the troposphere is a creature of the tropics and the concept of a tropopause has no application outside that realm. We must come to grips with the nature of an atmospheric column that contains increasing amounts of ozone at ever lower altitudes as we approach the pole. We must come to grips with the impact on the ozonosphere of mesospheric air drawn in over the winter pole.

To understand climate we  should monitor an interactive zone that is a much larger entity than what we have been accustomed to call the ‘stratosphere’. In high latitudes it extends from the surface to the outer limits of the mesosphere.

The presence of ozone ensures that the ‘stratosphere’is anything but forbiddingly stratified. Ozone is present in what we have hitherto considered to be the upper troposphere in mid and high latitudes. It gives rise to density differences that produce polar cyclones and the jet stream. It is responsible for the pattern of atmospheric pressure that is associated with all aspects of weather at the surface.

Wind speed increases with altitude to the upper limits of the ‘ozonosphere’. That larger entity stretches from the surface into, and includes the mesosphere.

Consider the temperature profile in the lower mid latitudes: 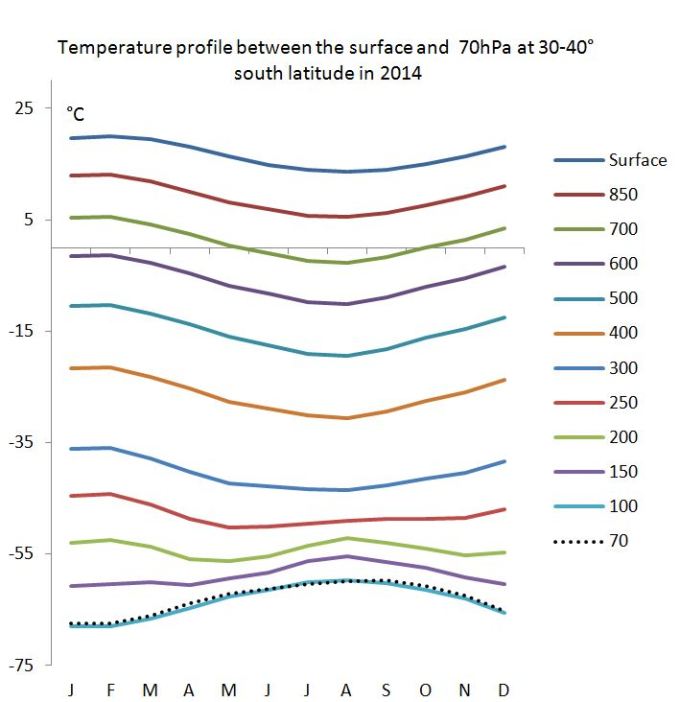 Temperature ceases to fall away with increasing altitude at 100 hPa so that between 100 hPa and 70 hPa there is no difference.  Patently, the temperature at the ‘tropopause’ is a product of the presence of ozone that increases in winter. Ozone affects the temperature profile from 300 hPa upwards, giving rise to density differences between air masses of polar and tropical origin responsible for the tropical arm of the jet stream.

We need to revise our concepts and classifications relating to atmospheric matters. Currently, they lead us astray. The make it impossible to apprehend the role that the stratosphere plays in the evolution of weather and climate on all time scales.

We are a victim of our own stupidity.